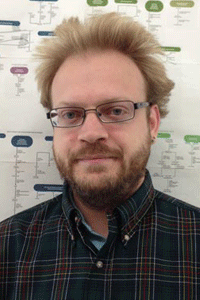 Assistant Professor
Genetics
425-G Henry Mall, 2434 Genetics/Biotechnology Center
(608) 890-2586
cthittinger at wisc dot edu
Hittinger Lab
Carbon metabolism is the energy superhighway of life. We study the diversity and evolution of yeast carbon metabolism, which is controlled by a complex system of interacting genes that respond to different carbon sources and determine the organism’s energy-use strategy. Some yeasts readily ferment sugars into ethanol, even in the presence of oxygen, but most organisms (including many yeast species) prefer respiration. The biofuel industry currently exploits the highly refined trait of aerobic fermentation or Crabtree-Warburg Effect in Saccharomyces cerevisiae to produce ethanol. However, yeast strains currently in use are not able to convert some common sugars, such as xylose, into ethanol efficiently enough to compete in the energy market. Other yeast species can metabolize xylose and make precursors for advanced biofuels, including oils, but they are more challenging to engineer and less thoroughly characterized. By understanding how evolution has sculpted and rewired yeast metabolic gene networks to meet their different ecological needs, we can better determine how to engineer complex biological systems to meet our energy needs. Since carbon metabolism is highly variable in yeasts, both within and between species, it makes an excellent model for understanding how the gene networks that control it have changed over the long arc of evolution. Most projects use the extensive knowledge of metabolism and gene regulation in Saccharomyces cerevisiae to inform comparative and mechanistic evolutionary studies in close and distant yeast relatives. Our research uses genome engineering and sequencing to study: 1. Yeast biodiversity, ecological genomics, and evolutionary genomics, especially the Y1000+ Project and Wild YEAST Program. 2. Genetic diversity of non-cerevisiae Saccharomyces and their contributions to industrial fermentation strains. We are particularly interested in S. eubayanus, S. uvarum, and S. kudriavzevii population genomics and the roles that genetic contributions from these species play in the production of lager beers, champagnes, and Belgian beers, respectively. 3. Applications of biodiversity, biotechnology, and synthetic biology for the brewing and biofuel industries. Research on lignocellulosic ethanol and advanced biofuels is performed in close collaboration with other members of the DOE Great Lakes Bioenergy Research Center where Prof. Hittinger leads the GLBRC Yeast Biodesign Team. 4. Evolution of aerobic fermentation, an unusual, derived trait that Saccharomyces yeasts share with some cancer cells and that is exploited by the brewing, wine, and biofuel industries. 5. Variation in the utilization of alternative and novel carbon sources, such as galactose, melibiose, sucrose, maltose, and xylose. 6. Rewiring of transcriptional regulatory networks. 7. How variation in gene networks is maintained and evolves. 8. The roles of contingency and ecology in the evolution of genome content.